PORTLAND - Kevin Bailey scored a team-high 23 points and Thomas van der Mars had 19 points and a career-high 18 rebounds as the Portland Pilots defeated crosstown rival Portland State 92-76 Saturday night at the Stott Center. Portland has now won five of its last six games and dealt the Vikings their first home loss of the season.

Bailey was solid throughout for the Pilots (6-3) finishing 7-for-14 from the field and 7-of-9 at the free throw line. He added three assists, two blocked shots, a steal and zero turnovers in 36 minutes of action. The Clovis, Calif. junior carried the Pilots with 16 first half points as Portland took a 47-40 lead into the break.

Van der Mars took over the second half with a dominant effort at both ends of the court. After battling early foul trouble, the Gouda, Netherlands junior center had 17 points and 10 rebounds in the second stanza and seemed to pick up every key rebound.

His three-point play off of an offensive rebound pushed the Pilot lead to 75-65 with 3:49 remaining. After four PSU free throws, Bailey hit a clutch three-pointer late in the shot clock and then van der Mars added another putback for an 80-70 lead with 2:09 left. His emphatic dunk in the final minute got the vocal Pilot crowd going.

Van der Mars finished 6-for-8 from the field and 7-for-9 at the foul line in 29 total minutes. It marked his third double-double of the season and he has now averaged 16.2 points and 9.5 rebounds over the last six games.

PSU junior point guard Tim Douglas, who spent his first two years on The Bluff with the Pilots, scored a game-high 27 points against his former team including 16 in the first half. But Portland was able to hold Douglas to just 3-of-12 shooting from the field in the second half.

Gary Winston added 13 points off the bench for the Vikings (4-3) and Aaron Moore chipped in 12.

Portland shot 48 percent from the field and made 29-of-36 free throws. The Vikings finished at 42 percent overall, but drilled 10-of-18 three-pointers. They made 16-of-26 from the foul line.

Douglas and Bailey matched each other shot-for-shot in the opening period finishing with 16 points each before intermission. The Vikings led by as much as six points midway through the period, but the Pilots finished the half with a 13-1 run capped by a Bobby Sharp 25-footer at the buzzer.
Posted by oregonsports at 12:14 PM No comments: 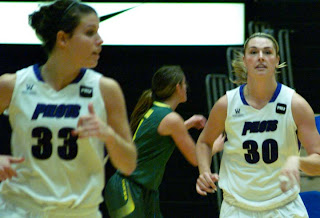 After going five minutes without scoring to start the second half, the Oregon Ducks got a pair of three-point shots from Jordan Loera to cut a 45-35 deficit to four points, and eventually cut the margin to 49-46.

But, that's as close as Oregon got to the host Portland Pilots, who powered through the end of the game for a 68-49 victory in non-conference women's basketball action Friday afternoon at the Chiles Center.

Sophomore Kari Luttinen scored a game-high 22 points to lead the Pilots, who improved to 5-7 with their fourth-straight victory.

"We're a young team, and we've just settled down in the last stretch of games," Portland coach Jim Sollars said. "We're taking better shots and are able to make a higher percentage of those better shots, and that's showing in our results."

Portland beat three teams from the Big Sky Conference entering the game and have added a Pac-12 team to their resume.

Ariel Thomas scored 12 points to lead Oregon, which dropped to 2-9. The Ducks had a significant sign of optimism on their bench, though, as sophomore Ellizabeth Brenner, fresh from helping the volleyball team to the national championship match, was in street clothes and preparing to rejoin the team.
Posted by oregonsports at 11:20 PM No comments:

It's a big weekend for the basketball program at the University of Portland.
Both the men's and women's team get a shot at showcasing how far they've progressed toward being prepared for the West Coast Conference season.
The women get a home game with Oregon on Friday, while the men's team plays in a four-team tournament Saturday in Las Vegas beginning with a game against Colorado State.
The women's team is 4-7 and lost five straight at one point. But, they Pilots have won their last three games against solid opponents - Nevada, Fresnoto the 73-49 win and was named the WCC Player of the Week.
Oregon has struggled mightily, winning just its first game Sunday to improve to 1-8.
Portland's men's team is 5-6 having hammered Portland State 81-60 and played competitively with both Washington State (72-60), and UNLV (68-60). But, the Pilots only narrowly beat Div. III Lewis & Clark (78-73), and got absolutely drilled by Ohio (81-52 and Kentucky (74-46).
Posted by oregonsports at 2:17 PM No comments: